Spotlight on the Lightning Network

The Lightning Network (LN) represents an exciting mechanism to solve the well-known scalability issue with blockchains. It is a level 2 protocol created by Lightning Labs , which was founded in 2016. LN provides fast, cheap, and private transactions, starting with Bitcoin. Below is an overview of how it works and its traction to date.

The basic idea of LN is that it’s a network that sits on top of a blockchain where users can transact quickly by setting up payment channels (private channels between two users that track who owes who). These transactions do not “settle” with the underlying blockchain every time – rather, the transactions over a given frequency – could be weeks, months – will net out to one transaction that settles with the underlying blockchain, in essence surmounting the scalability constraint of blockchains as they exist today. 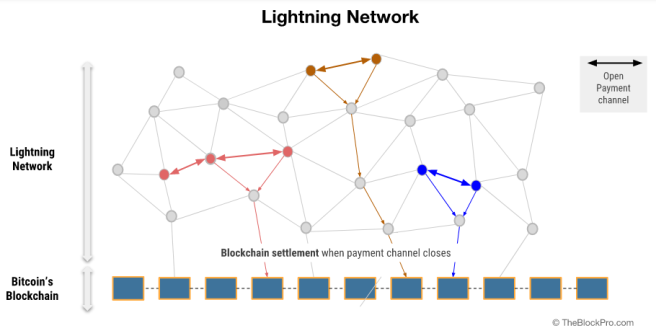 In practice, a user needs to generate an invoice in order to be able to receive bitcoin via LN. This was illustrated in a widespread fashion recently with the Trust Chain Torch passing among many high profile individuals/orgs, including Reid Hoffman, Fidelity Digital Assets, and Jack Dorsey himself.

You ready to carry the torch? Send me an invoice for 2860000 sats.#LNtrustchain #bitcoin https://t.co/7BmDBidKR6

Lightning Labs launched a beta version of LN one year ago. As the graph below shows, LN is starting to show exponential growth in the number of nodes, channels, and the cumulative amount of bitcoin across all channels.

While the service still has challenges to adoption, it appears that significant improvements in UX are on the way. To date, users have had to generate a new address to send an invoice each time they want to receive a payment. However, the company recently announced it’s working on features that would allow users to accept a static address, removing the additional step of generating an invoice.

While the company’s main focus has been on Bitcoin, implementations are either in the works or on the roadmap for additional protocols such as Litecoin, Zcash, and Stellar. Arjun Balaji, technical analyst at The Block, gave a summary of the major projects on the docket for the Lightning Labs team this year: “(1) improving security guarantees in the system, (2) maximizing liquidity at all steps of the process…, (3) improving privacy, and (4) simplifying UX as much as possible. ”

It is encouraging to see key infrastructure pieces begin to show real traction and adoption. As progress continues, we are likely to see a number of consumer applications geared toward micropayments pop up that are built on this new infrastructure. I’m personally excited to see the impact that Lightning continues to have and the applications it enables as it inches its way toward the mainstream.